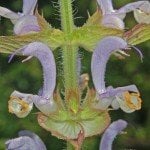 Clary Sage plant is known by the botanical name Salvia sclarea and the common names “Clary” and “Clear Eye.” This biennial or short-lived perennial herb is an imposing stand-out in the early summer garden and grows up to four feet high with big, hairy, heart shaped leaves and large spikes of pale blue, lavender, pink or white flowers. The bees in my garden love it and seem blissfully lulled by its calming aroma.

The information contained in this report is for educational interest only and is not intended to stand as claims for actions of the product Clary Sage Essential Oil; it is additionally not intended to be used for diagnosis or treatment of any physical or mental illness or disease.

There are about 450 different genera of plants in the species Salvia, including the more familiar Salvia officinalis (“Common Sage”) used in cooking, as well as Salvia apiana, which is popularly known as “White Sage” and has been used by Native Americans for smudging. It’s very important when selecting Sage essential oil to know the genus and species of the product you are getting since the properties of the various members of this group vary and some, such as Common Sage, which are safely used as herbal teas, acquire some toxicity issues when distilled into essential oil due to the way in which certain constituents become concentrated when the plant material is distilled.

The various plants commonly referred to as “Sagebrush” are unrelated to any true sage and belong to the plant Genus Artemisia.

The essential oil of Clary Sage is steam distilled from the flowering tops. The plant is native to the Mediterranean areas of Southern Europe and is naturalized as a wild flower all over the European continent. Today, it is grown for essential oil production in many places around the world, including the United States. French Clary Sage oil has the best aroma, in my opinion, and is the most expensive. Russia and central Europe produce some good quality Clary Sage oil as well and it’s generally lower in price than French selections.The essential oil you’re receiving this month is that wonderful French selection.

Clary Sage essential oil is colorless to pale yellow, with a soft, musky, nutty, sweet aroma. While many people find the aroma absolutely divine, some do not like it and describe it as “overpowering” or cloying. A few people report that it gives them a headache. To some extent, this reaction may come from simply smelling too much of the oil.

Clary Sage is an aromatically potent essential oil and I advise that you smell it initially on a blotter stick, holding it a few inches from your nose and fanning it  back and forth. Give a sniff or two then wait a few moments to gauge how it affects you. Clary Sage essential oil will make you sleepy if you sniff much of it. Personally, I prefer the aroma in a blend rather than as a single. Good aromatic blending choices include Lavender, Juniper, Coriander, Geranium, Cedarwood, Pine, Frankincense and citrus essential oils.

Clary Sage has been used as a medicinal herb in the Mediterranean region for at least 6,000 years. The Romans reportedly used the herb (not the essential oil) as an eye wash and it was also very highly regarded throughout the Middle Ages as a remedy for digestive problems, kidney disease, uterine and menstrual complaints, as a nerve tonic, and for cleaning sores.

Clary Sage essential oil has been used by aromatherapists with women who have absent or scanty menses and/or menstrual cramps, in which cases it is said to be best applied in warm compresses to the lower abdominal area.

Aromatherapists have also cited Clary Sage oil for its usefulness in cases of both acute and chronic stress, with accompanying muscular tension, and also report it to be helpful for digestive problems, especially when these problems are stress-related. It has been described as having a tonic action on central nervous systems that have become worn out from chronic stress and to help improve sex drive that has decreased due to stress.

Clary Sage essential oil has also been used by aromatherapists in skin care regimens and is considered to be especially useful for aging skin.

When using Clary Sage essential oil, it’s especially important to bear in mind that it has been described as likely to produce drowsiness and has been reported by some aromatherapists to produce an almost stuporous effect when used in combination with a relaxing massage. For these reasons, it is inadvisable to use Clary Sage essential oil before or while driving or engaging in other potentially hazardous activities that require full alertness.

Chinese Medicine actions that have been reported for Clary Sage herb and/or Clary Sage essential oil include the following:

Chinese Medicine practitioners who use essential oils have described Clary Sage essential oil as having both relaxing and strengthening properties, especially within the central nervous system and they have recommended its use in cases of chronic stress accompanied by fatigue. Due to its reputed ability to sooth the flow of Qi in the digestive tract, it has also been recommended for use with digestive problems related to stress and nervousness.

Chinese Medicine practitioners have also recommended inhalation of Clary Sage essential oil for respiratory system complaints, especially those where there is a feeling of constriction and/or spasm in the chest.

Subtle Effects: Chinese Medicine practitioners say that Clary Sage essential oil acts on the Bodily Soul, which is called the P’o in Chinese Medicine. The P’o gives us our instinct for our life’s true purpose, helps us to see things clearly and provides inspiration. When the P’o is overwhelmed with stress, we become despondent and cut off from out instincts and inspiration. By restoring the flow of Qi in the subtle bodies, Clary Sage essential oil is said in this tradition to have a beneficial effect on the P’o that helps to put us back in touch with our purpose, vision and instincts.

Clary Sage essential oil is non-toxic, non-irritating and non-sensitizing. Some aromatherapists have recommended that it should not be used during pregnancy or with estrogen dependent cancers. It’s very important to remember that if you drink alcohol or use certain drugs (narcotics, illegal drugs) within six hours of using Clary Sage essential oil you can get a very unpleasant stupefying effect, an intensification of intoxicating or psychotropic effects, and possible nausea. It can also reportedly cause nightmares if used in conjunction with alcohol consumption.

Some aromatherapists have cautioned against using Clary Sage essential oil with people who have low blood pressure.

Clary Sage essential oil oxidizes quickly, so store it carefully and make sure it’s fresh. Use it in small amounts.