Read on to learn more about why Artisan Aromatics carries six different types of true Lavender and how to choose the type that best suits your purposes, like French Lavender or Bulgarian Lavender or some other.

True Lavender – The best for aromatherapy

There are a number of different plant species in the genus Lavandula that go by the common name Lavender. There are, in fact, over 30 different species in this genus, and it’s easy to get them confused. The species that has become so well-known in aromatherapy for its relaxing and sleep-inducing properties is now usually referred to by botanists as Lavandula angustifolia. This plant is also known as true Lavender. In my opinion this is generally the best Lavender to choose for aromatherapy when you are looking for those classic properties.

In the past, the plant that we refer to today as Lavandula angustifolia was known to botanists as Lavandula officinalis and it has also at times been known as Lavandula vera, although some botanists have argued that Lavandula vera should only be used when referring to the plants that grow wild in the Provence region of France.

True Lavender is an evergreen woody herb native to southern Europe and the Mediterranean region, tropical areas of Africa, southern India, and the area around modern day Iraq. Fortunately, it is still growing wild in the Southern French Alps in a relatively small area between about 2,200 and 3,600 feet in altitude. These stands of wild plants are comprised mostly of Lavandula angustifolia but invariably contain a few representatives of other wild-growing lavender species as well, including some hybrids of the parent species. The essential oil produced from wild Lavender is sold as Lavandula angustifolia and is also sometimes referred to as population Lavender.

In the industry, the names Lavandula vera, Lavandula angustifolia and Lavandula officinalis are generally treated as synonyms and all refer to true Lavender. Just be sure when you buy “Lavender” essential oil to check the botanical name, and never buy any essential oils from companies that don’t provide botanical names on their labels.

Other species of Lavender

For most applications, true Lavender (Lavandula angustifolia/vera/officinalis) is the Lavender species preferred by aromatherapists because of its relatively higher percentage of esters (constituents that have relaxing properties) and lower percentage of camphor (a constituent with potentially neurotoxic effects). Specialists in aromatherapy sometimes make use of the other species in specific applications, but for the non-professional using essential oils, Lavandula angustifolia is the best choice.

As a general rule of thumb, the true Lavender essential oil produced from plants grown in France, especially the wild population Lavender from higher altitudes in the Provence region, is considered to be the very best available because these oils generally have the highest ester content. They are also the most expensive.

Some Bulgarian true Lavender essential oils also approach the ester levels achieved by French lavenders. While they are used by many aromatherapists (due to their lower cost), they are often somewhat higher in camphor than French lavender essential oils. The traditional view has been that they are not quite as potent for promoting sleep and relaxation. In my personal experience, I have not seen a great deal of difference between the effects of the Artisan French versus the Artisan Bulgarian Lavenders and have found both to promote relaxation and to be of help on nights when sleep won’t come. The Artisan Bulgarian Lavender is of high quality, and other Bulgarian lavenders will not necessarily give comparable results.

Our 6 types of Lavender 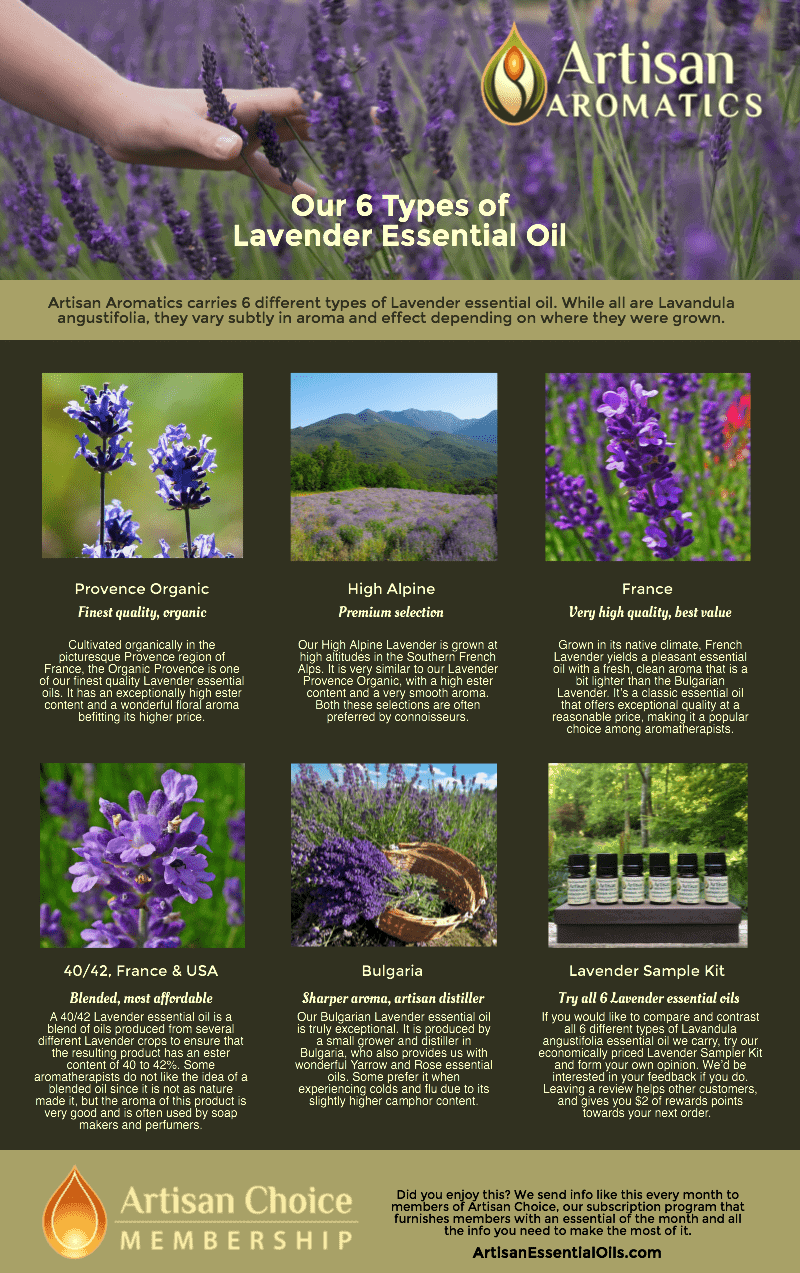 Now that you can see the complexities involved in ensuring you are getting the Lavender you want, let’s take a look at true Lavender in more detail.

The essential oil of Lavender is steam distilled from the flowering tops, and sometimes the lower leaves are included as well, although this practice yields an essential oil of lesser quality.

In addition to France and Bulgaria, Lavender essential oil is produced in many other places around the world, including:

In many cases, the Lavender essential oils from these other regions do not have a high enough percentage of esters to meet most aromatherapists’ standards, although there are exceptions.

The herb Lavender has a 2,500 year history of recorded use and is one of the best known herbs in the world. It was wildcrafted and traded in the ancient world, and was prized by the Egyptians as a perfume as well as in the mummification process. It may have first been domesticated in Arabia, well before the time of Jesus, where it was used as an expectorant and antispasmodic.

Because the ancient Romans were fond of bathing in water scented with Lavender flowers, the botanical name Lavandula is sometimes said to come from the Latin word lavare which means “to wash.” If you have ever seen the breathtakingly beautiful sight of hazy purple-blue fields of Lavender in bloom, I think you will agree it’s more likely to have come from the Latin word livendula, which means “blue-ish.”

The fresh or dried flowers and leaves of the Lavender plant were used from very early times as a strewing herb to deodorize and disinfect living spaces. The ancient Greeks and Romans used the aerial parts of the plant to cure or ward off a host of illnesses and eventually Lavender tea became established throughout Europe as a remedy for stomach complaints, nervousness and as a cosmetic water to benefit the skin. Lavender flowers have long been said to repel scorpions, and in France, you still see bowls of Lavender flowers resting on the window ledges for just this reason. The dried flowers and the essential oil are said to repel moths and to help prevent mustiness from mildew, and both are still used in sachets for drawers and closets.

The herb Lavender was cited by the famous Catholic abbess and healer, Hildegard of Bingen. It was one of her favorite herbs, and she recommended it for migraine headaches, a use which persisted into modern times, as well as for “maintaining a pure character.” Later, it was one of the major ingredients of the so-called “Thieves Vinegar” used in the Middle Ages during the Plague. It was also highly regarded as an aphrodisiac by some. I have yet to figure out how an herb believed to be an aphrodisiac could help one maintain what a 12th Century nun would consider a pure character!

Lavender has also been considered a “witch’s herb” for many centuries and has been said to protect against evil eye, evil spirits and ghosts. In Greek mythology, Lavandula stoechas was said to be one of the plants found in the garden of Hecate, who is regarded by pagans as a manifestation of the Three-fold Goddess.

By the 19th century, doctors in the United States and Europe used Lavender essential oil to treat headaches, memory loss, fainting, depression, and infertility in women.

Lavender essential oil has been credited by aromatherapists with a large number of physiological actions, some of which seem contradictory. The contradictions make more sense when you know that the essential oil is sometimes considered to have what in herbal medicine is called amphoteric properties. The word amphoteric comes from a Greek word meaning “both”, and in herbal medicine, an amphoteric herb is one that can exert dualistic effects depending on what the body needs. This is why, for example, you’ll see Lavender essential oil described as both a uterine relaxant and a uterine stimulant.

Traditionally, the actions of Lavender essential oil have been described in some sources as dose related: 4 drops or less of Lavender producing a relaxing effect, while 5 drops or more becomes stimulating.

Although Lavender essential oil was not historically used in ancient Chinese Medicine, it has been incorporated by contemporary practitioners like Gabriel Mojay, Dennis Willmont, and Peter Holmes.

Essential oils should not be taken internally except under the supervision of an appropriately trained medical professional such as a licensed physician or nurse.